Although the dynamics of the popular song’s creation process is based more on its instantaneous character than on a detailed elaboration, this general conduct is fertilely subverted by song composers who refer to the most varied processes of musical creation.

I sit down, give an in-depth listening to the music,

and at a certain moment it happens:

A word, a phrase comes, and it tells me:

That means that I am a music’s servant, slave, captive –

whatever it tells me to do, I do.

That’s how I work.

— that is my work process.

The orientation I was given by José Miguel Wisnik in the qualification board [i], which has contributed to the conception of this project, has pointed towards interviews that would investigate the meanders of the creation-performance act of each artist interviewed.

To carry out the interviews, I consider fundamental

that the relation of the artist with the instrument be registered.

That everything that is said, the artist should show.

If you do that, you’ll have statements that have never been made before.

in which way he relates with the instrument

and can extract elements that have intoning potential.

And so on and so forth for each one, go for what each artist is like.

In the case of Luiz Tatit, the intonation;

concerning the others, you will certainly find some other motivating question

that is pursued by that artist.

This objective, spelt out like that, led us into giving priority to the “personal” aspect as one of the “motivating questions” of the research itself. Such question finds clear reverberation in part of João Bosco’s statement – transcribed below – that reveals the idea of “intuitive secret” as a determining factor for a process that results in compositions bearing unique characteristics.

But when the point is something unique, personal,

there is always a reference that is an intuitive secret that each one of us has.

I don’t know exactly how it points to that reference that is going to produce a musical path.

That’s a process that is out of my depth to translate.

and various situations forge this moment.

I talk about mine, since I also have one.

Sometimes, it happens suddenly, out of the blue,

Sometimes, it comes at a slow pace, and you start feeling different,

and feels that something is happening.

you never know it for sure.

I’d rather think that we should always be taking aim,

because you don’t know what time it’ll be over.

While these things aren’t defined, you keep on developing…

the technique to play,

the way to sing.

you’re getting ready for the moment, and you don’t know when,

not even what kind of thing is gonna happen.

But you must be ready.

In the sphere of music composition for concert guitar, Sérgio Assad – who also teaches – does not stand too far from this same reference when conducting the formation years of his pupils.

I think that composition can’t be taught.

Nobody can ever teach a person to compose — that doesn’t exist.

What you can do is provide a person with tools to use with what this person already does.

The paradigm of an action based on personal solutions for an “invention” of what would come to be Brasil is Heitor Villa-Lobos.[i] His music is “the incubator for a large part of elements that are identified as national in the Brazilian musical language, whether it be erudite or popular” (JARDIM, 2005, p.23). thus the composer, much due to his special talent as melodist, establishes a field of intersection inside the Brazilian music that feeds on the transit – a two-lane course – between the popular and the erudite music.

Most interesting in these choros (‘Choros nº5 – Alma brasileira’),

are the irregular rhythmic and melodious cadences placed in square compass

which provides a disguised impression of “rubato”,

or of a slackening melodic execution,

which is exactly the most interesting characteristic of the seresteiros (serenaders). [i]

The Brazilian musician inherits the challenge to creatively and noncommitedly handle expressions from the musical universes that compound the “extensive diversity” mentioned by Wisnik [i] and it should be added that exceeds, haunts, lights up. Mapping the seven interviews – which constitute our seven chapters – is the result of the effort to establish as many articulations as possible in the universe where I act and in the nature of this study.

— that turns around one’s head in so many different ways

02:43 It’s important that our emotion survive

I don’t know if I could explain…

which is much more important than being able to explain.

that unknowingly you’ve just reminded me of

“it’s most important that our emotion survive” [i]

Força nenhuma no mundo interfere (No force in the world interferes)

Sobre o poder da criação (with the power of creation)

Que está no ar (that is in the air)

Chega a nos angustiar (It can even distress us)

I finalize the interviews playing Costa da Lagoa, a theme I composed on the border of Costa da Lagoa da Conceição, at a glorious daybreak. 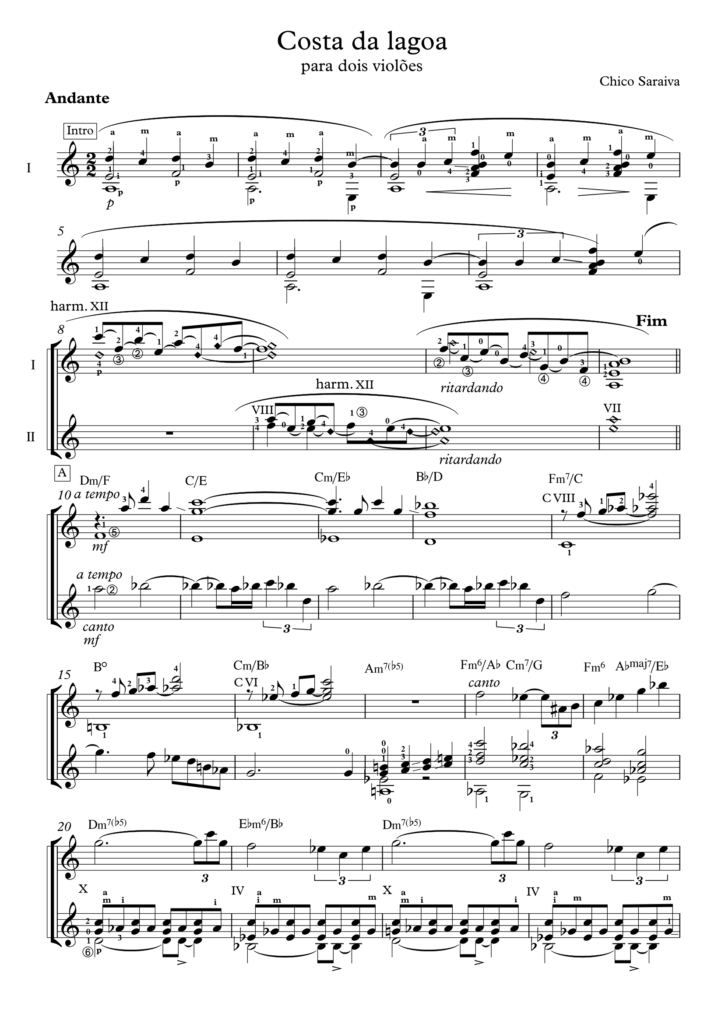 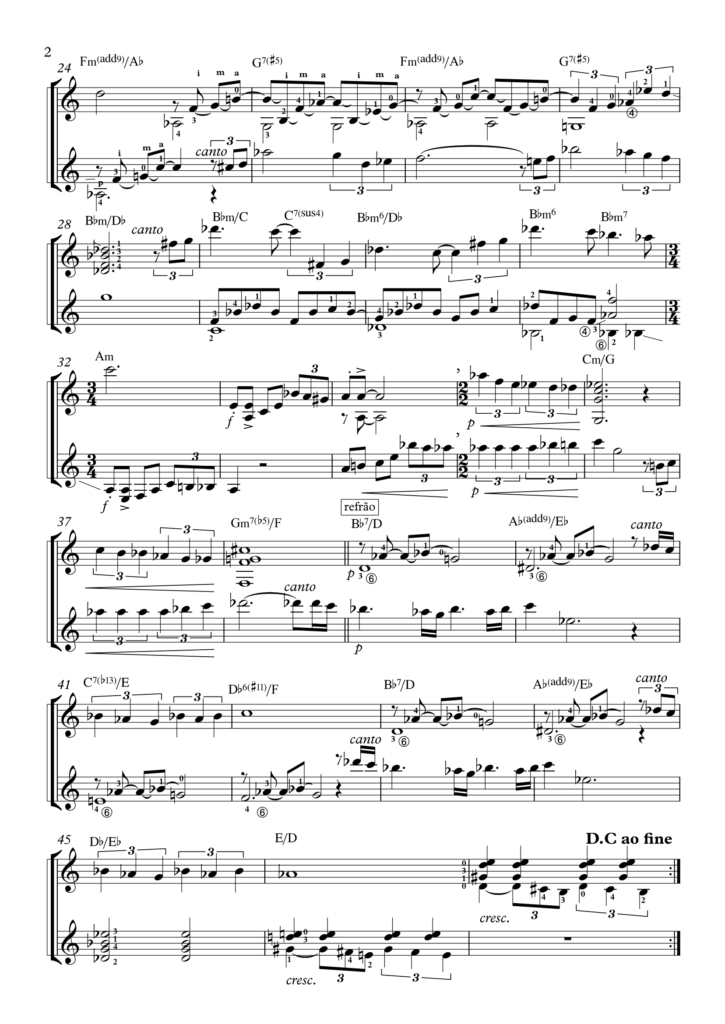